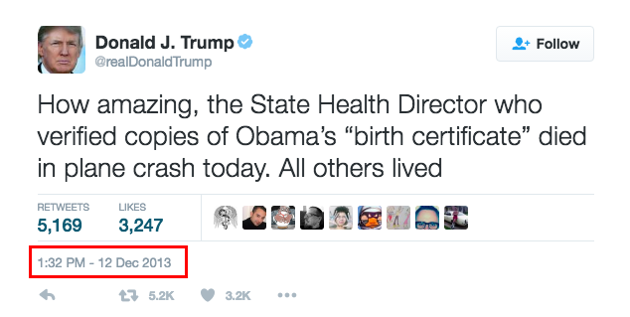 How amazing that a vulgar hate-spewing odiosity like this Ugliest American should be taken seriously as a potential President by a single human, let alone 40% of the electorate.

Ryan Struyk@ABC News (9/16/16): “But for years, Trump had helped perpetuate conspiracy theories about whether Obama was born in Hawaii, as his public birth certificate says, keeping the issue in the spotlight for years of his presidency. In fact, Trump continued to stoke the fires for years after Obama released his long-form birth certificate in April 2011. Trump also accused Hillary Clinton of starting the birther movement. But Politifact rated that claim ‘false’ in 2015, saying that a Clinton volunteer may have been behind the rumor.”